On August 15, 1978, I was both divorced and bankrupt on the same day. I made two decisions: One, I decided that nobody else was responsible for what happened to me, except me. Two, I was in this situation because I wasn’t telling myself what I wanted.

I made it my goal then to write in a journal daily for 25 years about something I wanted, starting with my current situation. This experience of “wanting” led me to see the difference between wanting and needing—and to a breakthrough in thinking when I related it to my 40-plus years of coaching entrepreneurs.

How are the top 1% different?

I’ve observed a marked dividing line between extremely successful entrepreneurs and those who peak after reaching a certain level of success. The dividing line seems to consist of two words: needing and wanting.

When you’re as successful as you need to be, there’s a stopping point you reach when you’ve satisfied your needs. It’s unconscious, of course, so the entrepreneur won’t even notice it happening. But when you’re as successful as you want to be, you just keep growing and expanding. The moment you reach one level of wanting, there is another just beyond that.

I began to see this distinction make a huge difference among entrepreneurs. And it all comes down to the difference between needing and wanting. 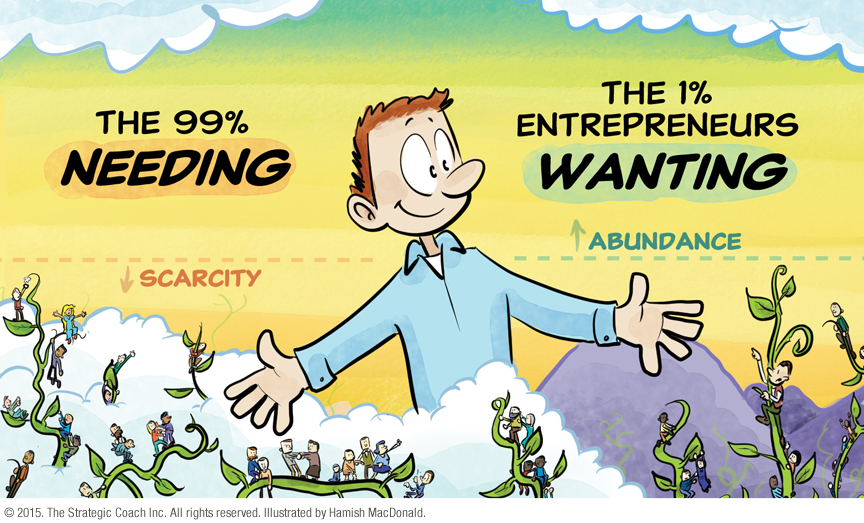 1. Internal vs. External “Needers” form their definition of success from external sources—society, their peers, their industry, and so on. In every case, the criteria for success come from an outside source. Once they reach the top, satisfying all their needs based on external criteria, there is nowhere further to go. They step off the gas pedal.

Entrepreneurs who are as successful as they want to be are 100 percent internally driven. Growth is a lifelong activity—they’re continually experimenting, innovating, and creating new breakthroughs.

3. Abundance vs. Scarcity Entrepreneurs who need security to be generated from the outside live in a world of scarcity. There are only so many opportunities and only so much money, time, and status. They know they have to compete with other “needers” for these elements of security because they don’t generate them for themselves.

For the “wanters,” on the other hand, life is abundant because they’re operating in the realm of freedom, which is generated from the inside. They’re not competing with anyone because, before they created their own freedom, it didn’t even exist.

4. Creative vs. Reactive The “needs” entrepreneur is always forced to react, which is especially true in our rapidly changing world. They’re hoping that what they have can stay the same, but any type of change means they have to react, increasing their need for security.

In the realm of wanting, though, the entrepreneur is taking things that no one really knows about and putting them together in a way that nobody had thought of before to produce a result that nobody knew could actually exist. We see this creativity in the world around us every day, especially in the realm of new technologies.

A bigger and better future for everyone.

We have many 21st-century role models who seem to have created new technological capabilities, resources, and opportunities almost out of thin air. One thing all of these innovators have in common is that they are not acting out of needing but out of wanting. They are internally driven and focused on expanding their own personal freedom. They are the 1 percent of entrepreneurs who operate in a world of growing abundance and who continually create bigger and better futures for themselves and everyone else.