Why Setbacks Are Key To Learning And Growth with Michael Reddy

If there’s one thing you can count on as an entrepreneur, it’s that you’re inevitably going to experience not one but several setbacks on the journey. What if you had the tools to face those setbacks with a new mindset and come out the other side with the lesson to add to your entrepreneurial book of wisdom?

A favorite Dan Sullivan quote about obstacles, setbacks, or failures that can apply to business or life is, “You either win or you learn. if you want to be successful, there’s no other option.”

When you face a setback with that mindset, you go into it knowing that there’s no failure as long as you take away the lesson. So if you’re smart, that’s exactly what you’ll do—learn from your mistakes—just like Michael Reddy did early in his career when he experienced his first shocking setback, and has done ever since. In fact, he made a business out of it.

“You either win or you learn. if you want to be successful, there’s no other option.” Dan Sullivan
Click To Tweet

Michael Reddy has been a Strategic Coach client for 16 years and one of our coaches for 11 of those years. Like all entrepreneurs, he’s seen his fair share of ups and downs. The difference between Michael and many entrepreneurs is that he learned early on how to stare setbacks square in the eyes, figure out how to solve the problem—and take away from the experience a lesson for life.

Even more impressive is that he developed a highly successful business helping other entrepreneurs who are “stuck” break through, transform whatever obstacle is holding them back, and go on to greater success.

Michael explains, “I go into a business and either turn them around or have them grow exponentially. I love to go into companies that are financially sound but are stuck for some reason, and break them through to reach new levels of profitability and revenue growth. I also have the opportunity to turn around a business I own and then sell.”

But long before he became the ultimate transformer, Michael was hit with his first major setback, which came as a total shock and threw his future into complete disarray.

An entrepreneurial career built on a setback.

After close to five years of law school, Michael joined a downtown Toronto law firm and set out on the path to become a successful corporate lawyer. He hated it. “I remember going in to the senior partner I was working for and saying, ‘This isn’t working out. I need to shift to another kind of law, one of the other partners.’” His boss told him he didn’t have that opportunity and that he was fired. Six months as a lawyer and his future looked nothing like what he’d envisioned.

That was a Friday. On the Monday, the other three partners all offered him a job, so his ego was slightly saved, but he had already figured out that corporate law was not what he wanted. And within seven days, he had an opportunity to partner up with an entrepreneur who went into companies in trouble and turned them around. This gentleman had started working on a large and complicated turnaround but didn’t have legal expertise on board yet—which was Michael’s introduction to life as an entrepreneur.

The mountains and the valleys.

Michael cautions that, just as there’s never just one bump in the road, there’s never just one entrepreneurial setback. His second devastating setback didn’t just affect Michael; it affected 50 new home buyers. Michael and a partner were on the land development and construction end of the business and working on two big projects north of Toronto. Their trust company was funding the construction.

When the trust company suddenly went broke, they went from having a complete construction funding line for 50 houses, by now under construction, to a receiver taking control and stopping all loans. “Not only had we lost our construction financing, but the sites had claims against them. We failed to close those 50 houses, and just before Christmas, I had to call and tell each of the buyers that they weren’t going to get the house. That was very hard,” Michael recounts.

Everything stopped dead for a while, but then Michael and his partner got into gear and talked to their trades, all of whom had worked with them for a long time and trusted them. “We wanted to resolve this in a way that worked for everybody,” says Michael. “We used our connections and were able to refinance the entire project. That was about a three-month process, and, believe me, it was a tough time to be an entrepreneur.”

The biggest lesson from this setback for Michael and his partner involved financing.

“Now, we will never, ever have only one financial source,” he says. “We’ll have two banks, two trusts, whatever, but we’ll always have two financial institutions funding us at any one time. If something happens with one, we have a fallback. The same thing holds true with investors in our projects. We’ll always have more than one investor so we always have other sources of capital.

“It was a hard, hard lesson that first time, but we figured it out pretty fast as a result, and we’ve built a crucial part of our business model on that lesson. That’s all because the first time, we didn’t.”

A mindset well worth developing.

How does an entrepreneur keep their frame of mind positive and strong when things around them are falling apart?

Michael shares how he stays on track: “I think there are two important parts to the mindset you have to have to transform setbacks. One, remember to look back to all the things you’ve accomplished to date and realize that you’ve been through some of the same setbacks, the peaks and valleys, before. This is just another valley. You figured out the last one, and the chances are good that you’ll figure out this one.

“Second, always be optimistic about the future. I try to keep things in perspective—most of the people in the world would love to have my problems. At the most basic level, I know that if I take care of myself, I’ll live a longer life. I have clean water to drink, there’ll always be food on the table, and I have a roof over my head. In that light, my problems aren’t really problems at all.”

Strategic Coach is a big believer in the art of positive thinking and that we can all create a bigger, better future for ourselves. We’ve seen time and time again that this type of mindset opens up fresh channels in the brain. It enables us to more clearly see the next best steps to break through obstacles in any area of life.

And make no mistake that learning from mistakes plays a key role in setting the scene for any life-changing transformation. 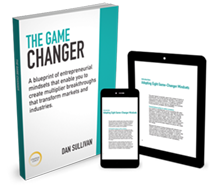 IT’S TIME TO JUMP TO THE NEXT LEVEL

Dan Sullivan reveals the mindsets, strategies, and actions required for an entrepreneur to become a game changer who transforms their industry.